What is Betaine HCl?

Betaine hydrochloride is a compound made from betaine and hydrochloric acid. Betaine, also called trimethylglycine or TMG, is a naturally occurring crystalline alkaloid present in food sources like sugar beets, wheat, quinoa, and spinach. In our bodies, it is a by-product of choline and glycine. Betaine serves as a methyl donor so certain processes within the body can take place; such as the conversion of homocysteine to methionine. Homocysteine is an amino acid produced by the body, often as a by-product of meat consumption. Without enough betaine, our bodies will have elevated homocysteine levels linked to increased risk of heart attacks and plaque formation within the cardiovascular system. Betaine is also crucial in protein metabolism and fat reduction.

HCl, on the other hand, is an acid with very low pH levels. It is produced by the stomach to support digestion, nutrient absorption and immunity. It is sometimes referred to as the body’s natural digestant and disinfectant. A healthy gastrointestinal system produces about 3 to 4 quarts of HCl every day. A state of acidity in the stomach is not only normal but necessary.

Betaine hydrochloride is the hydrochloride form of betaine. Betaine HCl is popularly used as a supplement to increase gastric acidity; but as we will discuss later, it is definitely beneficial to us in more ways than one.

Who should take Betaine HCl?

Betaine HCl is classified as a dietary supplement so technically, anyone can choose to take it. However, certain individuals can reap greater benefits from regular intake:

This condition is rare, especially in countries where wheat is considered a staple food. But despite the low stats, betaine deficiency is still a very serious concern that we should be aware of. Low levels of betaine in the body may contribute to increased homocysteine levels in the blood. This phenomenon can potentially lead to plaque build-up and atherosclerosis. Betaine is necessary in the conversion of homocysteine to methionine, an amino acid crucial for the growth of new blood vessels.

It is estimated that more than 50% of the US population beyond the age of 50 is regularly under-producing hydrochloric acid. This leads to numerous digestive problems and immune dysfunctions. Yet, we often hear people complain about hyperacidity. This is because symptoms of low stomach acidity are very much similar to manifestations of too much acid. So when people feel a burning sensation in their chest and throat, many take the easy way out (or so they think) and pop a tablet or two of antacid. This disturbs the natural digestive process and often makes symptoms even worse.

How much Betaine do we need?

There is no established daily recommended amount of betaine as of the moment. However, there are available information about suggested supplementation amounts depending on specific conditions aimed to be treated. 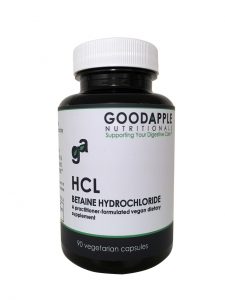 2. Supports osmoregulation (the natural balance of liquids and electrolytes in the body)

4. Supports the gallbladder and liver

When a person experiences heartburn, indigestion, reflux, or gas, the overproduction of stomach acid is often blamed. However, when checked professionally by a doctor, results often reveal that the problem is exactly the opposite.

With low stomach acid levels, the body is not able to breakdown food. This means that the body won’t be able to absorb the nutrients coming from food, thus depriving the organ systems the necessary vitamins and minerals for proper function. Putrefaction, or the rotting of undigested food, also happens. During this process, proteins get broken down by bacteria and create an organic, toxic acid, causing bloating and painful gas. When food rots in the stomach, lactic acid is formed. This inflames and damages the stomach and may lead to leaky gut. The lactic acid can also build up and rise up into the lower esophagus causing the feeling of heartburn or GERD. Abdominal pain, constipation or diarrhea, and other symptoms can be brought about by low acidity.

Betaine HCl taken before meals preps the stomach and helps in the processing of the incoming meal. Betaine HCl is absorbed through the enterocytes in the small intestine which is also the entry site for the bile. From there, the compound is converted to betaine which helps create a suitable environment for digestion.

With Betaine HCl, the body is able to process and assimilate proteins, vitamin B12, iron, and calcium.

Osmo-what? Osmoregulation is the process of maintaining salt and water within the body despite factors like diet, temperature, and the environment. This is a basic bodily function that ensures homeostasis or the balance state within each one of us, including animals. Transfer of nutrients and removal of waste products are just two processes that are possible through osmoregulation.

Betaine is a natural osmolyte, an agent involved in cell volume regulation and osmosignalling. It keeps cells hydrated and improves its resilience when external conditions are not ideal. By stabilizing hydration, it also indirectly increases energy production, improves glucose breakdown, and boosts lactate productivity. Through its role in osmoregulation, betaine also protects proteins, enzymes, and cells from environmental stress.

Having weak stomach acid or hypochlorhydria, not only comes with digestive repercussions, but also makes the body more susceptible to infection.

Acid secretion in the stomach serves as a first line of defence against enteric or intestinal infections caused by majority of bacteria that are ingested. One example is the H. pylori bacteria which contributes to peptic ulcers, leaky gut, and gastritis. It can also greatly affect our gallbladder and biliary system. If left untreated, H.pylori infection can be implicated in life-threatening conditions such as hepatitis, liver cancer, and pancreatic cancer.

In the presence of undigested food, bad bacteria can also thrive. Low stomach acidity enhances the probability of SIBO or small intestinal bacterial overgrowth. Other pathogens like Salmonella, Campylobacter jejuni, and Clostridium difficile can also flourish without our gut’s natural protection.

By increasing the acidity of the stomach, Betaine HCl therefore contributes to stronger immunity and increased gastrointestinal protection.

Betaine HCl, the Gallbladder, and the Liver

Betaine HCl supports the liver and gallbladder both directly and indirectly.

HCl is crucial in stimulating bile production and secretion. The bile is involved in digestion and detoxification. Betaine is also considered a potent liver protectant against hepatotoxins like ethanol and carbon tetrachloride. Together, Betaine and HCl are crucial in the breakdown of fats and the disposal of chemicals and other toxins that have accumulated in our bodies.

Some studies also claim that betaine improves the liver’s resistance against NAFLD (non-alcoholic fatty liver disease) and associated insulin resistance. In animal models, the administration of betaine supplements improved glucose and insulin levels. In human trials, on the other hand, patients with non-alcoholic steatohepatitis showed decreased amounts of steatosis (the abnormal synthesis and retention of triglyceride fat within the liver). Betaine is also said to reverse the adverse effects of alcohol on the liver, in particular, fatty liver. In the past, betaine has also been used to treat some liver-related disorders such as hyperkalemia and homocystinuria.

Numerous studies have been conducted to verify the potency of betaine to improve physical and athletic performance. However, more evidence is still needed to support that conclusion.

One attribute of betaine that makes it a potential performance enhancer is its ability to substantially increase nitric oxide in the body. This widens blood vessels and increases blood flow within the muscles during exercise. Enhanced blood flow means increased nutrient delivery and waste secretion, resulting in better performance.

Betaine and the Brain

Aside from its contribution to the brain through the mind-gut connection, (betaine is good for the GI system, making it good for the brain as well) betaine contributes to optimum brain function in other ways.

In a study among older adults, betaine has been associated with better memory reaction time, and brain function. In fact, the degree of brain activity improvement is directly proportional to the supplementation dosage.

Through its role in the production of methionine, betaine also indirectly increases the production of serotonin, dopamine, and norepinephrine – hormones that can help treat depression and anxiety. This antidepressant and anxiolytic property of betaine has been exhibited in various animal experiments.

Also related to its connection with methionine synthesis is the idea that betaine can help treat symptoms of autism. Children within the autism spectrum have low choline and methionine levels that can lead to abnormal gene expression. They are also vulnerable to oxidative stress.

Given this association, several experiments were conducted to see how betaine supplementation can help those with autism. One conclusion stated that betaine increases S-adenosyl-methionine (SAMe), thus normalizing the methionine cycle. Oral supplementation of folinic acid and betaine also increased antioxidant levels in the body.

Who should NOT take Betaine HCl?

Even though Betaine HCl is a beneficial supplement, not everyone should take it. If you have been prescribed H2-blockers for GERD, or if your doctor has confirmed that you need proton pump inhibitors for acid reflux, then don’t take Betaine HCl.

Pregnant women also usually have trouble with their stomach acid levels. Betaine HCl may or may not help. So far, there are no reported harmful side effects during pregnancy. In fact, betaine is important in development, from pre-implantation embryo up to infancy. It is important to remember, however, to check with your doctor before taking any supplements during pregnancy.

Lastly, if you are diagnosed with homocystinuria (high levels of homocysteine in the urine), do not use Betaine HCl in place of betaine anhydrous. Both contains betaine but the latter is the FDA-approved treatment for the condition which is a symptom of a rare genetic disease.

It is possible that your low stomach acid is a symptom of a more complex condition, rather than the disease itself. Thus, Betaine HCl can give relief, but may not address the root of the problem. Consult your medical practitioner for official diagnosis.

I am doing quite well! The gas pain is almost nonexistent, my bladder has returned to its normal position and the sharp pain from the gallbladder is not as frequent or as sharp. And, the nagging dull pain to the … END_OF_DOCUMENT_TOKEN_TO_BE_REPLACED

I wish that I found your site five years ago! Before I had a gallbladder attack and had it removed. Your site is very informative. My doctors never told me anything after the operation as to diet or supplementing with … END_OF_DOCUMENT_TOKEN_TO_BE_REPLACED

I just wanted to thank you. I was two days away from having my gallbladder removed, but I read your site, postponed the surgery, and switched to a 100% natural diet. Within three weeks I was symptom-free and have been … END_OF_DOCUMENT_TOKEN_TO_BE_REPLACED