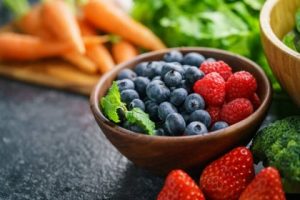 We all know we need fiber as a part for our diet. But until a few years ago, dietary fiber was not given the attention as it deserves unlike other food components such as fats, sugar, and proteins. Some researchers think that it’s probably because fiber is indigestible and of negligible nutrient value. Or maybe it was because it is easily accessible? Despite its availability, most Americans in this day and age do not get the recommended amount of dietary fiber. The suggested daily value is 25g per day based on a 2,000 calorie diet. It may seem easy to achieve but with the proliferation and popularity of processed foods, it is often missed. In fact, the average individual only consumes about half of the recommended amount daily. Luckily, with the exponential increase in the number of studies on fiber benefits as part of our daily diet, more and more authorities have taken interest on this roughage.

The FDA defines dietary fiber as a type of carbohydrate found in plant foods made up of many sugar molecules linked together. It is known to affect various physiologic functions like intestinal regularity, satiety, reducing cholesterol, and resolving numerous digestive issues. High fiber intake is associated with the prevention and treatment of chronic diseases like diabetes, heart disease, obesity, and certain types of cancer. But did you know that dietary fiber can also reduce the risk of gallstones? It also helps in improving overall gallbladder health.

How Does Fiber Help with the Gallbladder?

According to a study published in the American Journal of Gastroenterology, sufficient insoluble fiber intake may decrease gallbladder surgery risk among women. In fact, participants with the highest amounts of dietary fiber were 13% less likely to have their gallbladders taken out. The type of fiber also influenced the output. When researchers controlled for soluble and insoluble fibre consumption simultaneously, insoluble fiber intake proved to be most beneficial. This research was conducted by observing 69,000 women over a 16-year period.

A separate study published in the American Journal of Surgery also showed the benefits of fiber for the gallbladder. The experiment made on dogs placed on a cholesterol-supplemented lithogenic (gallstone-forming) diet showed that the administration of dietary soluble fiber over 6 weeks inhibited cholesterol stone formation by reducing the cholesterol saturation levels in the bile. This protective effect is associated with a decrease in cholesterol that contributes to bile toxicity.

Obese patients on a rapid weight loss diet are prone to developing gallstones. A study done over a span of 5 weeks showed subjects who were given a fiber-rich diet were protected from the accumulation of biliary sludge. This is despite the fact that both obesity and rapid weight loss pose a huge risk for the development of gallstones. 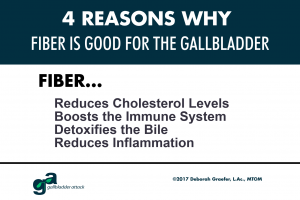 4 Fiber Benefits for the Gallbladder

This is one of the more famous fiber benefits for the gallbladder. Although the cholesterol-busting mechanism of fiber is not yet fully understood, the hypothesis is that dietary fiber significantly impacts bile acid metabolism. Soluble fiber binds to the bile acids in the body and speeds up transit time to excretion. When this happens, the amount of bile re-circulated is decreased, requiring the liver to use more cholesterol to produce more bile acids, thereby reducing the amount of cholesterol which the body uses to make low density lipoproteins. Aside from taking part in the stimulation of bile acid production, fibers also help in controlling cholesterol by increasing bowel elimination

Fiber helps boost our body’s natural disease-fighting abilities. Aside from helping in the detoxification process through its effect on the bile and excretion, a good amount of dietary fiber in our system keeps our gut flora balanced. When soluble fibers ferment, it forms short chain fatty acids (SCFA) that are important in the production of components needed for immune protection. Of course, it also helps that most of the foods naturally high in fiber are also the same food sources that are high in vitamins, minerals, antioxidants, and phytonutrients.

A low-fiber diet can contribute to increased toxic levels in the body. This is because of fiber’s role in the reduction of cholesterol, metabolism of bile acid, and elimination of body waste. As explained in the studies cited earlier, fiber helps decrease toxic bile in the biliary system and it also prohibits the accumulation of sludge thereby ensuring healthy bile flow and preventing gallstone formation. 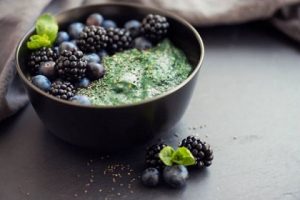 There are direct and indirect fiber benefits as our body deals with inflammation. Indirectly, naturally occurring phytonutrients found in most fiber-rich foods help reduce inflammation. There are studies that also prove that fiber has a direct impact on inflammatory diseases and oxidative stress. One example is the data from 27,312 women from the Iowa Women’s Health Study showing the inverse association between inflammation and the ingestion of fiber daily. A similar research among diabetic women of the Nurse’s Health Study showed that subjects consuming more fibers had lower values of inflammatory markers. Also, as a result of its overall effect in digestion, dietary fibers help increase the body’s production of anti-inflammatory cells called cytokines.

How Can We Get More Fiber?

The most commonly consumed foods like processed and fast foods are low in dietary fiber. Therefore, we must be very conscious and intentional in meeting our dietary fiber requirements daily. The ideal way of taking it is by distributing and taking it in small snacks and meals throughout the day. Below are common sources of dietary fiber:

Soluble fiber, as the name suggests, dissolves in water but is indigestible. It is not absorbed into the bloodstream but is generally fermented by bacteria in the lower intestine to form short-chain fatty acids. Types of soluble fiber include beta-glucan, pectin, natural gums, and inulin. The items below are rich in soluble fiber. Please note, however, that these are also in our “do-not-eat list under the Gallbladder Diet. 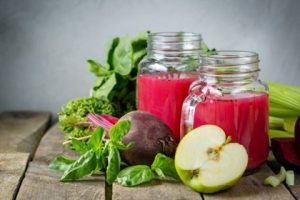 Here are some foods high in soluble fiber but are also gallbladder-friendly:

Insoluble fiber, on the other hand, does not dissolve in water and is less fermentable. It is also indigestible so it passes through the intestines almost intact, but works like a sponge that pulls water into the stool, making it easier to excrete. It can also delay glucose or sugar absorption which results in more even blood sugar levels, increase fecal weight to help stool pass more quickly and regularly, and help control and balance the pH in the gut. Some insoluble fibers include cellulose, lignin, some pectins, and some hemicelluloses. Below are examples of gallbladder foods high in insoluble fiber:

The collection of various studies and experiments prove the numerous physiological and subsequent health benefits of regular dietary fiber intake. It is not just a good ally for a better gallbladder, it is also an effective booster for overall health. Just a reminder, if you have a gallbladder disease, it is important to cross-check this list of fiber-rich foods to the gallbladder diet plan.

Your Bile Salts tabs work wonders. I had my gallbladder removed in 2008 and have tried many things to relieve myself if bloating with nearly everything I ate… Nearly every brand of enzymes, some with extra fat digesting help, even … END_OF_DOCUMENT_TOKEN_TO_BE_REPLACED

So glad I found this website! I was having so many digestive issues, after a year of searching and trying, I was finally diagnosed with food allergies and leaky gut. I didn’t know where to turn. A friend recommended gallbladderattack.com … END_OF_DOCUMENT_TOKEN_TO_BE_REPLACED

I just wanted to thank you. I was two days away from having my gallbladder removed, but I read your site, postponed the surgery, and switched to a 100% natural diet. Within three weeks I was symptom-free and have been … END_OF_DOCUMENT_TOKEN_TO_BE_REPLACED

I had a gallbladder removal surgery in Spring 2017, and during the surgery, the doctor made a major surgical error that left me with chronic pain and problems. For many months, I was unable to eat solid food, I could … END_OF_DOCUMENT_TOKEN_TO_BE_REPLACED

I received the Gall Bladder Attack Kit over a week ago and started taking the products that night. It is definitely working; I have not had a single attack since! (I was experiencing pain almost daily before, often escalating to a 12 … END_OF_DOCUMENT_TOKEN_TO_BE_REPLACED

You requested that I check in after being on the 30-Day Gallbladder Solution for approximately two weeks. I am happy to say that I have not experienced another attack since being on the diet and taking the supplements. You suggested that I … END_OF_DOCUMENT_TOKEN_TO_BE_REPLACED

Dear Heidi, Sharmila, and Deborah,  I cannot thank you enough. The food is wonderful, even the first week. The free recipes (especially for weeks 5-8) are amazing and absolutely gorgeous! My stomach is shrinking, and I can’t believe the small portions that satisfy me. I believe I can … END_OF_DOCUMENT_TOKEN_TO_BE_REPLACED

I’m so glad I found your website! I’ve been taking the 3 combination pills for sluggish gallbladder and my pain has all but ended. I’ve convinced my Dr. that I’m certain through diet and these pills I can forget about having my … END_OF_DOCUMENT_TOKEN_TO_BE_REPLACED

Thank you so much! You have helped me more than I can express. I would have been lost without your kindly shared knowledge. My experience of extreme gallbladder attacks literally knocked me down. I could only lay on my back completely still … END_OF_DOCUMENT_TOKEN_TO_BE_REPLACED

I just wanted to let you know that yours is one of the few emails I get that I read immediately and always know that I will benefit from what you have written! I cannot tell you how grateful I am … END_OF_DOCUMENT_TOKEN_TO_BE_REPLACED

After my recent ordeal at the hospital when I thought the pain might be my gallbladder again, the doctor said after all the tests that I have the cleanest gallbladder in Lake County. I told him about working with your program and … END_OF_DOCUMENT_TOKEN_TO_BE_REPLACED

I wish that I found your site five years ago! Before I had a gallbladder attack and had it removed. Your site is very informative. My doctors never told me anything after the operation as to diet or supplementing with … END_OF_DOCUMENT_TOKEN_TO_BE_REPLACED

Day ten on the gall bladder 30 day kit and the pain is gone. Following the diet regime and taking the supplements and the improvement is amazing. I appreciate all the advice on you website and in the emails and am changing … END_OF_DOCUMENT_TOKEN_TO_BE_REPLACED