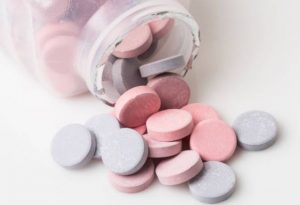 Antacids are a multi-million-dollar business. It is so easy to get your hand on them since they are available over-the-counter. It also a common notion that mild digestive symptoms like hyperacidity, belching, or gas can be easily solved by popping a tablet. But have you ever seen one of these drugs resolve the problem? An antacid may reduce the symptoms some of the time, but they could actually make your gallbladder problem worse. The gallbladder secretes bile in response to the acidity of the food bolus. It helps to make that food mixture more alkaline.

One research study on healthy subjects found that after coming off 8 weeks of proton pump inhibitors, those previously healthy people developed acid symptoms! And although they often stop the symptoms, they also stop digestion. Worse yet, one of the contributing factors to a good functioning gallbladder is having enough acid in the stomach. So if you’re an antacid popper, you’re not helping your gallbladder problem.

When people complain of heartburn or “acid indigestion” they assume that their stomach has too much acid. So they take an antacid. They often do have too much acid, but not the kind they think. As people get older, they tend to make less hydrochloric acid (HCl) and if one eats  under stress, has a poor diet, or eats too much, this can decrease the HCl secretion as well. (That includes children, not just adults).

So what happens is that we eat a meal (usually on the run), and not enough acid or enzymes are secreted to digest the meal. When we eat under stress the digestive secretions shut down – like while driving, working, having an unpleasant conversation at the meal, etc. Then the food sits in the warm stomach undigested and begins to ferment and putrefy. This is the acid that is causing the problem. Proton pump inhibitors (PPIs) such as Prevacid do the same thing. They decrease acid secretion and impair proper digestion.

What is needed here is to provide the body with the acid that it is not making itself. In other words, you don’t want to stop the acid with antacids, you want to add acid to aid or continue digestion to relieve the discomfort. Sound strange? Try it. 90% of heartburn/indigestion problems can be taken care of by this method. And the problem gets better, not worse. There really can be an end to it! Always look past treating only the symptoms. Look for the root of the problem.

Many times simply removing gluten from the diet can improve the symptoms of heartburn or acid reflux. Gluten can cause inflammation in the stomach and esophagus, irritating the lining. Try removing gluten and other possible allergens such as dairy for three weeks. If you’re following a gallbladder diet, both of those have already been removed.

In addition, take 1 capsule of Betaine HCl and 1-2 Digestive Enzymes with each meal. This will provide both the acid and the enzymes needed for more complete digestion and will support the gallbladder function. Zinc-Carnosine  can also do wonders to improve digestion, promote healthy mucosal lining, protect the GI system from PPIs and NSAIDs among many other benefits.

I just wanted to let you know that yours is one of the few emails I get that I read immediately and always know that I will benefit from what you have written! I cannot tell you how grateful I am … END_OF_DOCUMENT_TOKEN_TO_BE_REPLACED

Thank you so much! You have helped me more than I can express. I would have been lost without your kindly shared knowledge. My experience of extreme gallbladder attacks literally knocked me down. I could only lay on my back completely still … END_OF_DOCUMENT_TOKEN_TO_BE_REPLACED

Your Bile Salts tabs work wonders. I had my gallbladder removed in 2008 and have tried many things to relieve myself if bloating with nearly everything I ate… Nearly every brand of enzymes, some with extra fat digesting help, even … END_OF_DOCUMENT_TOKEN_TO_BE_REPLACED

I have just finished the 30 Day Menu Plan and I am out of pain for the first time in years. I am really looking forward to starting the 2nd phase 30 Day Plan and see where that takes me! … END_OF_DOCUMENT_TOKEN_TO_BE_REPLACED

Day ten on the gall bladder 30 day kit and the pain is gone. Following the diet regime and taking the supplements and the improvement is amazing. I appreciate all the advice on you website and in the emails and am changing … END_OF_DOCUMENT_TOKEN_TO_BE_REPLACED

I sincerely thank you for having all this information up and available. The menu plan has provided me with a starting point for eating again and learning how to control the pain through diet. The site is a wealth of revelations and … END_OF_DOCUMENT_TOKEN_TO_BE_REPLACED

When I was waiting for my gallbladder operation as I had a severe infection and a gallstone/sludge – my lifesaver was your site and your gallbladder diet! Thanks for that! I made it to my operation without one flare-up in … END_OF_DOCUMENT_TOKEN_TO_BE_REPLACED

I wish that I found your site five years ago! Before I had a gallbladder attack and had it removed. Your site is very informative. My doctors never told me anything after the operation as to diet or supplementing with … END_OF_DOCUMENT_TOKEN_TO_BE_REPLACED

So glad I found this website! I was having so many digestive issues, after a year of searching and trying, I was finally diagnosed with food allergies and leaky gut. I didn’t know where to turn. A friend recommended gallbladderattack.com … END_OF_DOCUMENT_TOKEN_TO_BE_REPLACED

I am doing quite well! The gas pain is almost nonexistent, my bladder has returned to its normal position and the sharp pain from the gallbladder is not as frequent or as sharp. And, the nagging dull pain to the … END_OF_DOCUMENT_TOKEN_TO_BE_REPLACED

After my recent ordeal at the hospital when I thought the pain might be my gallbladder again, the doctor said after all the tests that I have the cleanest gallbladder in Lake County. I told him about working with your program and … END_OF_DOCUMENT_TOKEN_TO_BE_REPLACED

Dear Heidi, Sharmila, and Deborah,  I cannot thank you enough. The food is wonderful, even the first week. The free recipes (especially for weeks 5-8) are amazing and absolutely gorgeous! My stomach is shrinking, and I can’t believe the small portions that satisfy me. I believe I can … END_OF_DOCUMENT_TOKEN_TO_BE_REPLACED

You requested that I check in after being on the 30-Day Gallbladder Solution for approximately two weeks. I am happy to say that I have not experienced another attack since being on the diet and taking the supplements. You suggested that I … END_OF_DOCUMENT_TOKEN_TO_BE_REPLACED

I received the Gall Bladder Attack Kit over a week ago and started taking the products that night. It is definitely working; I have not had a single attack since! (I was experiencing pain almost daily before, often escalating to a 12 … END_OF_DOCUMENT_TOKEN_TO_BE_REPLACED