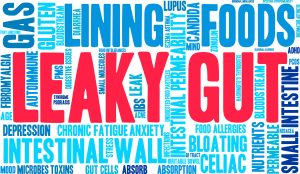 Leaky gut is a condition of increased permeability of the intestinal wall. It is, in fact, supposed to be permeable, because that is how the nutrients from food get into the blood stream to be delivered to the rest of the body. However, it is only small molecules that are supposed to be getting through.

In leaky gut large protein molecules are escaping due to injury or inflammation of the gut wall. What used to be a tightly knit barrier or wall becomes porous — it basically has holes or larger gaps allowing bacteria, viruses, undigested fat molecules, unbroken down proteins etc. to run amuck in the blood stream.

The immune system tags these substances as foreign and launches an attack on them. This can be the beginning of food intolerances or food allergies and of autoimmune reactions which may eventually become an autoimmune disease. For example, if one of the gluten proteins escapes from the small intestine, and goes where it shouldn’t, it gets tagged as a foreign substance, and the immune system from now on will recognize it as such and launch an immune attack whenever it is eaten. Since one of the proteins in gluten closely resembles the molecular structure of thyroid tissue, if one also has an autoimmune thyroid condition such as Hashimoto’s, an attack on the gluten can also become an attack on the thyroid tissue.

Leaky Gut Syndrome May Cause Gallstones

Numerous research studies in the last 10 years are making a correlation between leaky gut syndrome and the formation of gallstones. A study in China (see below) found that there were similar pathologies involved in gut permeability as in the formation of pigment stones which, in my opinion, could suggest that the presence of pigment stones might warrant testing for leaky gut.

How Does One Get Leaky Gut

Leaky Gut starts often with an injury to the intestines by food poisoning, parasites, food intolerances or allergies which all cause inflammation to the gut wall. Certain drugs such as anti-inflammatories and antibiotics can also damage the integrity of the lining. Whereas a healthy gut can heal itself quickly from one bout of antibiotics or the occasional pain killer, chronic use, and add to that gluten sensitivity and the healing is more difficult. Both antibiotics and anti-inflammatories cause a disruption in the flora of the bowel called dysbiosis which is a major contributor to gut permeability. The goal of treatment is largely dependent on being able to change the imbalance of gut flora.

The interesting thing about food intolerances is that if they “only hurt a little bit” one can easily ignore it. But these constant assaults do create a chronic low-grade inflammation at best. And the catch 22 here is that the leaky gut is caused by the inflammation of the intestinal lining and leaky gut itself causes farther degeneration of the gut lining as well. So where do we start?

Essentially what this means is that the lifestyle of the average westerner, especially American, is prone to leaky gut. The average diet listed above is bound to cause heartburn and the use of ant-acids or proton pump inhibitors, and who hasn’t been on antibiotics? Many have had yeast infections, bacterial infections and even H. plylori. Hashimotos autoimmune disease of the thyroid is the number 1 autoimmune disease in America; diabetes is on the rise and those who don’t have it have insulin resistance or reactive hypoglycemia. Now, if you don’t have or haven’t had any of the above, perhaps you just suffer from foggy brain which is often a result of early, yet progressive neurodegneration. Any way you look at it, we all have great possibility of having a leaky gut sooner or later.

may include any of the following:

Have you ever noticed a connection between something you eat and a foggy brain, lack of sharpness or concentration? Research shows that when you eat something you are sensitive to, such as wheat protein (gliadin found in gluten), as it causes inflammation in the lining of the gut it also can cause a simultaneous inflammation in the lining of the brain, causing the effect of foggy brain. The protein “zonluin” has been identified as causing a break in both the gut lining and the blood brain barrier. You are what you eat takes on a whole new definition here. If you want to keep your brain sharp, you’ll want to keep your gut healthy as well.

I just wanted to let you know that yours is one of the few emails I get that I read immediately and always know that I will benefit from what you have written! I cannot tell you how grateful I am … END_OF_DOCUMENT_TOKEN_TO_BE_REPLACED

I have just finished the 30 Day Menu Plan and I am out of pain for the first time in years. I am really looking forward to starting the 2nd phase 30 Day Plan and see where that takes me! … END_OF_DOCUMENT_TOKEN_TO_BE_REPLACED

So glad I found this website! I was having so many digestive issues, after a year of searching and trying, I was finally diagnosed with food allergies and leaky gut. I didn’t know where to turn. A friend recommended gallbladderattack.com … END_OF_DOCUMENT_TOKEN_TO_BE_REPLACED

I had a gallbladder removal surgery in Spring 2017, and during the surgery, the doctor made a major surgical error that left me with chronic pain and problems. For many months, I was unable to eat solid food, I could … END_OF_DOCUMENT_TOKEN_TO_BE_REPLACED

Dear Heidi, Sharmila, and Deborah,  I cannot thank you enough. The food is wonderful, even the first week. The free recipes (especially for weeks 5-8) are amazing and absolutely gorgeous! My stomach is shrinking, and I can’t believe the small portions that satisfy me. I believe I can … END_OF_DOCUMENT_TOKEN_TO_BE_REPLACED