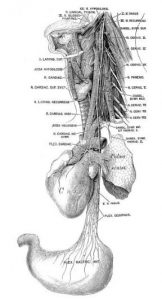 The wanderer – that’s what the vagus nerve is also known as. And true to it is name, this nerve indeed extends all the way from the brain stem to the lowest viscera of the abdomen, traveling through multiple organs such as the lungs and the heart, spreading its network to the tongue, throat, intestines and glands. The vagus nerve explores beyond the reach of the other cranial nerves. In fact, it is considered to be one of the largest nerve systems in the body.

Made from a linkage of tiny fibers, it is difficult to conceive how the vagus nerve is able to directly and indirectly influence numerous bodily functions. Its role in the digestion is not surprising as it is part of the parasympathetic nervous system, responsible for maintaining unconscious actions such as keeping the heart rate constant and instigating the breakdown of food. But the gallbladder? You read that right! The vagus nerve indeed has a crucial role to play in our biliary system too. Isn’t our body amazing?

There are four ways that the vagus nerve affects gallbladder function: 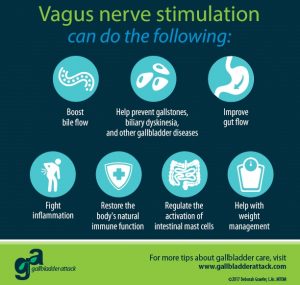 What Does the Vagus Nerve Do?

In terms of the gallbladder and digestion, the vagus nerve:

The most obvious benefit of vagal stimulation to our digestive and biliary function is its impact on bile production and flow. First, it innervates the liver where the bile is manufactured. It also has direct connection to the gallbladder which serves as the reservoir of the bile before it goes through the Sphincter of Oddi and onto the duodenum. This can translate to good digestion, effective nutrient absorption, and regular elimination of body wastes.

Bile stagnation and abnormal ejection rate are two of the many common root causes of gallbladder diseases. Therefore, when a person has a healthy vagal tone and bile circulation is not impeded, the risk of developing diseases like gallstones and biliary dyskinesia is significantly reduced.

Vagus stimulation ups stomach acidity, boosts the secretion of digestive juices, and improves overall gut motility by regulating the rhythmic muscle contraction (peristalsis) of the digestive tract. This is because the parasympathetic part of the autonomic system is concerned with food processing, resting, and restoration. Disorders such as constipation, dyspepsia, IBS, and Chron’s Disease may be prevented if the movement within the digestive tract is normal and unobstructed. Damaged vagus nerve may not be able to send signals to the stomach muscles which may cause food to stay in the stomach longer, leading to motility disorders or GERD.

Although inflammation is not completely evil, numerous diseases of the gallbladder and the gut are closely linked to an inflammation of some kind. The vagus nerve could be said to be “anti-inflammatory.” Studies show that stimulating the vagus nerve is enough to inhibit tumor necrosis factor (TNF), an inflammatory signalling molecule produced by mast cells and others. Vagal stimulation also prevents the release of inflammatory cytokines. This also helps in managing stress and improving the way our bodies respond to pain and sickness. This claim is supported by studies which show that the activation of inflammatory pathways is known to induce fatigue.

Closely related to its effect on inflammation, vagus nerve stimulation helps the body to respond to infection. In fact, recent studies are exploring the effectiveness of vagus nerve stimulation in treating some autoimmune diseases like rheumatoid arthritis and lupus. Some pharmaceutical companies are also investing in the development and research of methods to modulate nerves such as the vagus, to address cardiovascular and metabolic diseases.

Another benefit of vagal stimulation arising from its impact on the inflammatory response is its regulation of mast cells in the gastrointestinal tract. Mast cells play an important immunoregulatory role in the maintaining gut sensitivity and vascular permeability. Although these cells allow our body to respond to bacterial and parasitic infections, several studies have shown that an overabundance of mast cells is found in patients with some GI diseases.

Obesity is one health issue that affects all organs and bodily functions. Thankfully, activation of the vagus nerve is one of the many things we can do to address it and maintain a healthy weight. This is because the vagus nerve controls how hungry we feel. Two of the many nerve signals that it communicates to the brain are hunger and fullness. A healthy vagal tone would be efficient in telling the brain to stop feeling hungry after a meal. Vagus activation also helps in regulating blood sugar levels as it prompts the liver to produce lesser glucose.


If the vagus nerve contributes that much, shouldn’t we be taking care of it? Yes we should! Otherwise, we might end up with a hyperactive or hypoactive vagus nerve. Common symptoms of vagal nerve dysfunction include:

Studies show that some pharmaceutical drugs may damage the vagus nerve. Since this network of fibers serves as the connection between the gut and the brain, gastrointestinal imbalances caused by medication likewise affect the nerve itself. This can also happen when we do not eat a healthy diet. Processed foods and allergens may cause neurotoxicity. This means that our body’s response to what we eat may disrupt or even kill our nerves. Chronic alcoholism also causes significant neuro damage. It is therefore imperative to maintain a balanced organic diet and avoid unnecessary and over medication.

Another way to take care of the vagus nerve is through regular and moderate stimulation. Medical practitioners may implore the use of a PEMF (Pulsed Electro Magnetic Field) Machine to activate the nerves. However, there are a lot more simpler methods that we can employ to keep our nerves healthy. 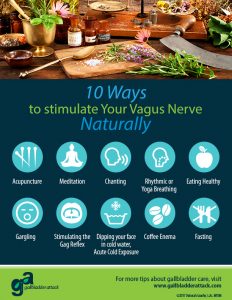 Acupuncture, specifically at a point in the ear where a branch of the vagus nerve lies, is effective in stimulating a vagal response. It can be done the traditional way or via electroacupuncture. Another method using the same principle as electroacupuncture is bioelectronics, which requires the use or implantation of a small device to stimulate various nerve pathways. External devices are also becoming available.

Relaxation and rest are aspects of our being that are largely associated with the vagus nerve. This is why the vagus is also said to be the source of “grace under pressure”. Meditation strengthens the vagal tone, as does praying or getting in touch with positive emotions. An experiment conducted in 2010 showed a significant rise in vagal tone among the 70 respondents who were asked to meditate regularly for nine weeks. It was also said to promote feelings of goodwill among the respondents

Chanting, or singing at the top of your voice, initiates the work of a vagal pump to send relaxing waves through the body via increased oxytocin release. The internal vibration taps into the muscles located at the back of the throat to activate the nerves and stimulate our organs.

We can never emphasize enough the importance of a good diet to our overall well-being. This is therefore an irreplaceable method to keep the vagus nerve healthy. Allergens, processed foods, and alcohol have a direct impact on how well the vagus transmits signals to and from the brain and to its network.

This is not a dainty type of gargling. The type that helps stimulate the vagus nerve is loud and aggressive – both forceful and long. Similar to chanting, this method taps into the branch of the vagus present in the throat.

With the use of your fingers or tongue depressors to stimulate the gag reflex (also known as pharyngeal reflex), you can exercise your vagus nerve. This reflex involves an abrupt elevation of the soft palate and contraction of the muscles in the pharynx, allowing for the stimulation of vagus nerve branches abundant in our tongue and throat.

8. Dipping your face in cold water or acute cold exposure

During exposure to cold, the body tries to acclimate and adjust to the external temperature. In the process, the activity and influence of the sympathetic system is reduced while the parasympathetic system mediated by the vagus nerve is activated. However, the effectiveness of this method depends on a lot of things like age, skin, length of exposure, habituation, etc.

There are lots of benefits to coffee enema, that’s why have dedicated a full page to it . Aside from directly helping the digestive and biliary system, coffee enemas also stimulate the vagus nerve when strong enough and held long enough.

Since the vagus nerve is connected with the process of digestion, giving your body a break from eating, signals the brain that digestion is unnecessary so energy can instead be used for relaxation or other body functions. If full fasting for a few days is not possible or advisable due to some medical conditions, you may find benefit in doing intermittent fasting or reducing calorie intake. These processes increase the high frequency heart rate variability used to measure vagal tone. The higher your vagal tone, the better it is for your body.

Bonus tip: If you are a fan of gadgets and would like to have regular vagus nerve stimulation while doing less, then maybe you’d like to try this with me –  the NERVANA Generator and Headphones Unit. This is a wearable device that sends gentle electrical wave through the left ear canal for vagal stimulatiom. It is known to give a calm, relaxed feeling for most users in a natural way. Let’s try it together and let me know what you think.

Selfhacked (2013) 32 Ways to Stimulate Your Vagus Nerve (and All You Need to Know about It).

When I was waiting for my gallbladder operation as I had a severe infection and a gallstone/sludge – my lifesaver was your site and your gallbladder diet! Thanks for that! I made it to my operation without one flare-up in … END_OF_DOCUMENT_TOKEN_TO_BE_REPLACED

Thank you so much! You have helped me more than I can express. I would have been lost without your kindly shared knowledge. My experience of extreme gallbladder attacks literally knocked me down. I could only lay on my back completely still … END_OF_DOCUMENT_TOKEN_TO_BE_REPLACED