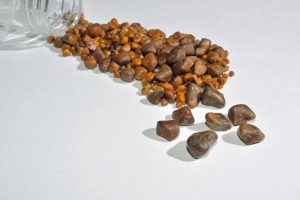 Gallstones are solidified and hardened accumulations of cholesterol, calcium compounds, bilirubin, digestive fluids, and other particulates within the gallbladder. This gallbladder disease is also known as cholelithiasis, derived from the Greek terms “chole” which means bile and “lithos” meaning, stone. Bile is a fluid made in the liver, stored in the gallbladder and used to digest and absorb fats and remove wastes, among the many other functions it has.

Gallstone disease is a very common disorder, affecting a total of approximately 20.5 million men and women aged 20 to 74 in the United States alone based on the third National Health and Nutrition Examination Survey. Its prevalence makes it one of the top reasons for gastrointestinal-related hospitalizations. Although the mortality rate is much lower now, thanks to recent medical technology, gallstone disease is still something that must be taken seriously. Annually, gallstones account for a staggering total of ~$ 6.2 billion worth of financial burden for tests, treatment, research, and other medical procedures.

The most common type of gallstone is called cholesterol stone which makes up 90-95% of known gallstone cases. When there is too much cholesterol in the body, the bile can thicken and crystallization of the cholesterol may occur. A pigment stone, on the other hand, is caused by abnormally high levels of bilirubin and other minerals in the bile. Bilirubin is the dark yellowish waste substance produced during the breakdown of old red blood cells. It usually passes through the liver before it gets excreted by the body. Pigment stones also tend to develop in people who have liver cirrhosis, severe haemolytic anemia or infections in the bile duct.

Oftentimes, gallstone formation is a long and complicated process. The particulates do not instantly form stones. Instead, it may start with a biliary sludge – a stagnant and concentrated bile residue. This sludge is known to be a precursor to gallstones. Once the bile fluid turns into sludge, the cells lining the gallbladder will also no longer be able to efficiently absorb fat and cholesterol.

Various reasons prompt the development of gallstones. Some of the common causes are:

There are also certain unavoidable risk factors that increase your chance of developing gallstones:

WHAT ARE THE SYMPTOMS OF GALLSTONES?

It is not unusual for people to have gallstones and know nothing about until it is discovered accidentally by some medical tests. This is because most of the time, the symptoms of gallstones are absent, thus the term “silent gallstones”. Of the known cases of gallstones, approximately 80% do not cause any pain, nor does it manifest through other symptoms. However, once a gallstone blocks a bile duct, it can cause sharp and severe abdominal/gallbladder pain known as biliary colic. It is important to note though, that gallbladder pain is not automatically caused by gallstone blockage. A low-functioning gallbladder or disruption to the bile flow may also cause sudden and intense agony. To read more about bile duct blockage, inflammation and infection click here.

A few or all of the following may be experienced as symptoms of gallstones:

• Severe pain on the right-side of the abdomen
• Pain may refer to the back, towards the right shoulder or between the shoulder blades
• Symptoms often manifest at night, especially after having a fatty meal
• Pain may feel sharp and piercing like a knife. In acute cases, it may be cramp-like
• Chronic pain may be dull and colicky
• Bloating and gas that may cause distention
• Possibly belching or burping – often very deep
• Inhaling deeply can worsen the pain, making you double over
• Nausea and vomiting may be experienced
• Chills and fever may accompany other symptoms
• Gallbladder chest pain may be likened to a heart attack
• Yellowing of the skin and whites of eyes also known as jaundice may develop

Since chronic symptoms overlap with irritable bowel syndrome and non-ulcer dyspepsia, further medical testing is highly encouraged. This way, doctors may come up with an accurate diagnosis. Also, gallbladder symptoms can look and feel the same with or without stones.

If you have reason to believe that you may have gallstones, despite the absence of pain and other symptoms, it is best to seek professional medical help. Early detection is always a good way to prevent complications, shorten hospitalization and even lessen medical expenses.

During consultation, a patient interview will most probably be conducted first. Through this, the patient’s health history, diet and other related details may be gathered and factored in. Upon the doctor’s evaluation and recommendation, one or few of the following tests may be conducted to confirm the presence of gallstones.

Though gallstones often do not cause pain or show symptoms, it may still cause a plethora of complications. Although some of these conditions are very rare, it is still important to know that these can happen if gallstones and other gallbladder diseases are not diagnosed e 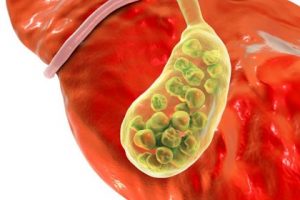 There are many different ways to treat gallstones. The most common and highly recommended measure is still surgery. However, non-invasive and natural alternatives are also an option.

Sometimes, cholecystectomy is not the end of the story for those with gallstones. In some cases, even after the surgery, patients continue experiencing digestive issues. It is in this light that some medical practitioners recommend the use of complementary and alternative treatments together with a dramatic change in lifestyle and eating habits. Regular exercise, moderate eating and maintaining the ideal weight are keys to maximize the benefits of a gallbladder diet plan.

THE GALLBLADDER DIET – What to eat, which foods to avoid and how to do it

The benefits of The Gallbladder Diet can go beyond just helping you with your gallstones. It can also aid in managing gallbladder attacks and lead you to improve your overall digestive health. If you want to get your energy back, end your recurring symptoms and free yourself from gallbladder pain, this might just be the solution you are looking for. Get your Gallbladder Menu plans today or click here for recipes for your gallbladder pain.

I just wanted to let you know that yours is one of the few emails I get that I read immediately and always know that I will benefit from what you have written! I cannot tell you how grateful I am … END_OF_DOCUMENT_TOKEN_TO_BE_REPLACED

I had a gallbladder removal surgery in Spring 2017, and during the surgery, the doctor made a major surgical error that left me with chronic pain and problems. For many months, I was unable to eat solid food, I could … END_OF_DOCUMENT_TOKEN_TO_BE_REPLACED

I sincerely thank you for having all this information up and available. The menu plan has provided me with a starting point for eating again and learning how to control the pain through diet. The site is a wealth of revelations and … END_OF_DOCUMENT_TOKEN_TO_BE_REPLACED

I received the Gall Bladder Attack Kit over a week ago and started taking the products that night. It is definitely working; I have not had a single attack since! (I was experiencing pain almost daily before, often escalating to a 12 … END_OF_DOCUMENT_TOKEN_TO_BE_REPLACED

I wish that I found your site five years ago! Before I had a gallbladder attack and had it removed. Your site is very informative. My doctors never told me anything after the operation as to diet or supplementing with … END_OF_DOCUMENT_TOKEN_TO_BE_REPLACED

Day ten on the gall bladder 30 day kit and the pain is gone. Following the diet regime and taking the supplements and the improvement is amazing. I appreciate all the advice on you website and in the emails and am changing … END_OF_DOCUMENT_TOKEN_TO_BE_REPLACED

After my recent ordeal at the hospital when I thought the pain might be my gallbladder again, the doctor said after all the tests that I have the cleanest gallbladder in Lake County. I told him about working with your program and … END_OF_DOCUMENT_TOKEN_TO_BE_REPLACED

Dear Heidi, Sharmila, and Deborah,  I cannot thank you enough. The food is wonderful, even the first week. The free recipes (especially for weeks 5-8) are amazing and absolutely gorgeous! My stomach is shrinking, and I can’t believe the small portions that satisfy me. I believe I can … END_OF_DOCUMENT_TOKEN_TO_BE_REPLACED

So glad I found this website! I was having so many digestive issues, after a year of searching and trying, I was finally diagnosed with food allergies and leaky gut. I didn’t know where to turn. A friend recommended gallbladderattack.com … END_OF_DOCUMENT_TOKEN_TO_BE_REPLACED

I just wanted to thank you. I was two days away from having my gallbladder removed, but I read your site, postponed the surgery, and switched to a 100% natural diet. Within three weeks I was symptom-free and have been … END_OF_DOCUMENT_TOKEN_TO_BE_REPLACED

When I was waiting for my gallbladder operation as I had a severe infection and a gallstone/sludge – my lifesaver was your site and your gallbladder diet! Thanks for that! I made it to my operation without one flare-up in … END_OF_DOCUMENT_TOKEN_TO_BE_REPLACED

Thank you so much! You have helped me more than I can express. I would have been lost without your kindly shared knowledge. My experience of extreme gallbladder attacks literally knocked me down. I could only lay on my back completely still … END_OF_DOCUMENT_TOKEN_TO_BE_REPLACED

You requested that I check in after being on the 30-Day Gallbladder Solution for approximately two weeks. I am happy to say that I have not experienced another attack since being on the diet and taking the supplements. You suggested that I … END_OF_DOCUMENT_TOKEN_TO_BE_REPLACED