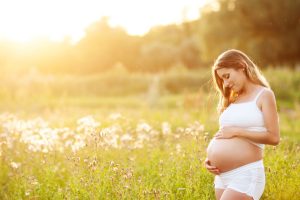 To say that the body undergoes many changes during pregnancy is an understatement. A woman increases blood volume by up to 50%, the lung capacity increases, muscles get stretched as they have never been extended before, and many other biological processes are altered. The changes in digestion and bile circulation during pregnancy are just some reasons why gallstones and gallbladder issues are more likely to develop.

But did you know that vitamin D deficiency can make it worse for pregnant women?

What happens to the gallbladder during pregnancy?

To accommodate the nutritional needs of the fetus, a woman’s body automatically slows down the digestive process, which helps to increase absorption. This includes decreased gallbladder motility, bile secretion with increased amounts of cholesterol, and reduced amounts of chenodeoxycholic acid. The extraordinarily high estrogen and progesterone hormones during pregnancy also have a huge impact on the digestive process.

Now, what does Vitamin D Deficiency have to do with it?

The primary role of vitamin D is to maintain calcium and phosphorus levels in our body to allow metabolism, bone mineralization, and neuromuscular transmission (a process by which the central nervous system controls the movement of muscles in the body). This means that vitamin D directly influences gallbladder motility and ejection fraction. For individuals with vitamin D deficiency (VDD), this can be an issue, so much more for pregnant women who are undergoing a lot of biological changes affecting the gallbladder and digestive process as a whole. 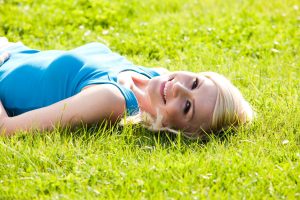 According to several studies, vitamin D deficiency is associated with gallbladder stasis and biliary dyskinesia or low functioning gallbladder. These are important risk factors for gallstones. Vitamin D Deficiency also affects the gallbladder since it is associated with gestational diabetes and insulin resistance, which may lead to systemic inflammation. On the other hand, sufficient levels of vitamin D help decrease fasting blood sugar, reduce visceral fat, and decrease inflammation. All these can lower the risk of gallstone formation.

If you are pregnant and obese, then you’re at greater risk.

Pregnant women who are obese and suffering from fat malabsorption are more prone to vitamin D deficiency. Since vitamin D is fat-soluble, obesity during pregnancy is associated with VDD because vitamin D is sequestered by body fat. Fat malabsorption among those with pre-existing conditions, like gallbladder disease, cystic fibrosis, celiac disease, and Chron’s disease, also affects the body’s amount of vitamin D. These reasons make pregnant women a high-risk group for vitamin D deficiency.

Other factors that may lead to vitamin D deficiency:

Vitamin D deficiency in pregnancy and its impact on the fetus, the newborn, and childhood

There are many ways vitamin D influences placental, fetal, and maternal health during pregnancy. In one of our past blog posts, we emphasized the importance of Vitamin D3 and K2 in boosting the immune system. This also applies to expectant mothers and their unborn children. 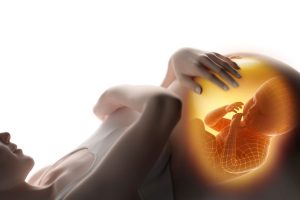 Vitamin D Deficiency affects not just the mother but the child as well. VDD can have a profound impact that can be carried up to adulthood. Recent evidence indicates that nutrients can modify the immune and metabolic programming during sensitive fetal and child development periods. Children born to mothers with vitamin D deficiency are more likely to have acute lower respiratory tract infections, recurrent wheezing, and allergic diseases. In a study among school-aged children, vitamin D supplementation was associated with a reduction in the incidence of diabetes during a 30-year follow-up.

Vitamin D is produced by the body during exposure to sunlight but is also found in oily fish, eggs, and fortified food products. Unfortunately, pregnant women and those will gallbladder issues cannot eat some of these food sources. Also, consuming these foods cannot make up for the lack of sun exposure. Aside from having an insufficient amount of vitamin D, products that claim to be fortified usually contain Vitamin D2 which cannot be easily absorbed by the body. This is why vitamin D supplementation is necessary.

According to the American College of Obstetricians and Gynecologists, there should be supplementation with 1.000-2.000IU/day of Vitamin D. The Canadian Academy of Pediatrics recommends supplementation with 2.000IU/d during pregnancy and lactation to prevent Vitamin D Deficiency. A 2013 study on patients with gallstones showed that vitamin D supplementation could improve gallbladder ejection fraction by 20% and result in significant resolution of gallbladder stasis.

In our previous blog post, we explained that the most effective form of vitamin D is D3 which works best with vitamin K2. We recommend a D3K2 combo by Genestra, a quality brand that carries one in an emulsified form that is designed for optimal absorption. (Available on Amazon)

I just wanted to let you know that yours is one of the few emails I get that I read immediately and always know that I will benefit from what you have written! I cannot tell you how grateful I am … END_OF_DOCUMENT_TOKEN_TO_BE_REPLACED

You requested that I check in after being on the 30-Day Gallbladder Solution for approximately two weeks. I am happy to say that I have not experienced another attack since being on the diet and taking the supplements. You suggested that I … END_OF_DOCUMENT_TOKEN_TO_BE_REPLACED

Thank you so much! You have helped me more than I can express. I would have been lost without your kindly shared knowledge. My experience of extreme gallbladder attacks literally knocked me down. I could only lay on my back completely still … END_OF_DOCUMENT_TOKEN_TO_BE_REPLACED

So glad I found this website! I was having so many digestive issues, after a year of searching and trying, I was finally diagnosed with food allergies and leaky gut. I didn’t know where to turn. A friend recommended gallbladderattack.com … END_OF_DOCUMENT_TOKEN_TO_BE_REPLACED

I wish that I found your site five years ago! Before I had a gallbladder attack and had it removed. Your site is very informative. My doctors never told me anything after the operation as to diet or supplementing with … END_OF_DOCUMENT_TOKEN_TO_BE_REPLACED

Day ten on the gall bladder 30 day kit and the pain is gone. Following the diet regime and taking the supplements and the improvement is amazing. I appreciate all the advice on you website and in the emails and am changing … END_OF_DOCUMENT_TOKEN_TO_BE_REPLACED

I’m so glad I found your website! I’ve been taking the 3 combination pills for sluggish gallbladder and my pain has all but ended. I’ve convinced my Dr. that I’m certain through diet and these pills I can forget about having my … END_OF_DOCUMENT_TOKEN_TO_BE_REPLACED

Dear Heidi, Sharmila, and Deborah,  I cannot thank you enough. The food is wonderful, even the first week. The free recipes (especially for weeks 5-8) are amazing and absolutely gorgeous! My stomach is shrinking, and I can’t believe the small portions that satisfy me. I believe I can … END_OF_DOCUMENT_TOKEN_TO_BE_REPLACED

I just wanted to thank you. I was two days away from having my gallbladder removed, but I read your site, postponed the surgery, and switched to a 100% natural diet. Within three weeks I was symptom-free and have been … END_OF_DOCUMENT_TOKEN_TO_BE_REPLACED

I had a gallbladder removal surgery in Spring 2017, and during the surgery, the doctor made a major surgical error that left me with chronic pain and problems. For many months, I was unable to eat solid food, I could … END_OF_DOCUMENT_TOKEN_TO_BE_REPLACED

Your Bile Salts tabs work wonders. I had my gallbladder removed in 2008 and have tried many things to relieve myself if bloating with nearly everything I ate… Nearly every brand of enzymes, some with extra fat digesting help, even … END_OF_DOCUMENT_TOKEN_TO_BE_REPLACED

I have just finished the 30 Day Menu Plan and I am out of pain for the first time in years. I am really looking forward to starting the 2nd phase 30 Day Plan and see where that takes me! … END_OF_DOCUMENT_TOKEN_TO_BE_REPLACED

After my recent ordeal at the hospital when I thought the pain might be my gallbladder again, the doctor said after all the tests that I have the cleanest gallbladder in Lake County. I told him about working with your program and … END_OF_DOCUMENT_TOKEN_TO_BE_REPLACED

I received the Gall Bladder Attack Kit over a week ago and started taking the products that night. It is definitely working; I have not had a single attack since! (I was experiencing pain almost daily before, often escalating to a 12 … END_OF_DOCUMENT_TOKEN_TO_BE_REPLACED

I sincerely thank you for having all this information up and available. The menu plan has provided me with a starting point for eating again and learning how to control the pain through diet. The site is a wealth of revelations and … END_OF_DOCUMENT_TOKEN_TO_BE_REPLACED